One of the oldest Anglican Churches in Madras that is now Chennai, St. Thomas English Church owes its origin to the missionaries of the Vepery Mission and Rev. Robert Carver who was instrumental in building the church.
Consecrated on 10th December, 1842, this little Church of St. Thomas-by-the-sea, like the Roman Cathedral, and the Tamil Church of later date, was named in honour of the Apostle Thomas who was martyred and buried in this area. During the British period, “this was the Church of the Protestant elite in Madras, the residents of the garden-houses of Adyar, with the Governor having his own pew.” 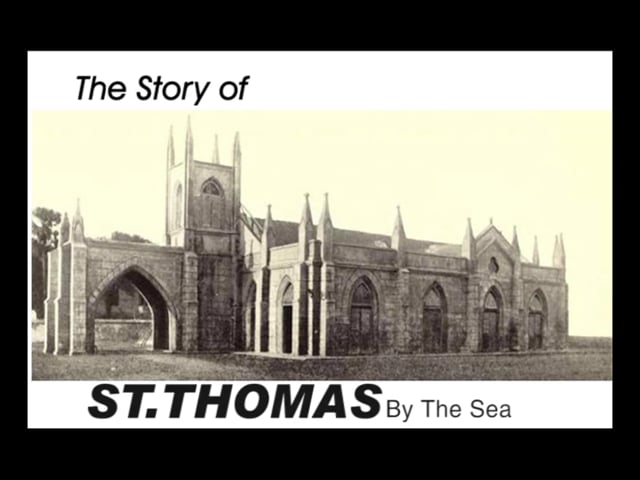 Originally known by the name of Meliapore or Mylapore, San Thome has a long and eventful history. This area received its name of St. Thoma (Sao Thome) from the Portuguese who built a fort here. The Dutch, the French, and the English struggled for its possession until Fort St Thoma was ceded in 1479 to the British Admiral Boscawen with the receipt of a character from the Nawab Mohamed Ali Khan. From then on, San Thome remained more or less continuously in English hands.

The history of the English Church at San Thome, in its early stages, is closely interlinked with the history of the Vepery Mission, which is the oldest Mission of the Church of England in India, inaugurated by the Society for Promoting Christian Knowledge (S.P.C.K). The Vepery Mission was formed in 1728 at the instance of Benjamin Schultz, then head of the Danish mission at Tranquebar, after obtaining the permission of the King of Denmark and promise of protection from the East India Company. However, the S.P.C.K. period of the Vepery Mission came to an end in 1826 just two years before the completion of its centenary, and with it came to an end also the anomalous position of non-Anglican Missionaries engaged by an Anglican Missionary Society, now the S.P.G (Society for the Propogation of the Gospel). The San Thome Mission was the eldest daughter of the Vepery Mission, but not apparently the best-cared-for daughter, as it was a neglected mission field. And since 1810, other missionary organizations took advantage of the neglected state of the field and worked here.

In 1822, when Elijah Hoole, on behalf of the Methodist Mission, arrived on the scene, he concentrated chiefly on itinerating European work and relinquished charge of the Tamil congregation after two years.
The year 1824 is a landmark year in the history of the Church at San Thome as it marks the arrival of Robert Carver, an earnest and experienced Methodist Missionary from Ceylon who, after a meritorious service of nine years, had sustained a grievous bereavement. Carver succeeded in securing the goodwill of Sir Thomas Munro, the Governor of Fort St. George, and took charge both of the work of the old Vepery Mission and of that at Poonamallee, St. Thomas Mount and Pallavaram. His services were greatly valued by all non-Roman residents in the district, whether British, ‘Eurasians,’ or ‘native’, and he was much liked personally. He used in his ministrations the Book of Common Prayer of the Church of England.
In 1830, Bishop Turner of Calcutta visited San Thome and he felt that in view of the many European residents in San Thome – then a popular health resort, especially for sick officers and their families – there should be a proper Church and an episcopally ordained minister. To this end, he himself contributed a sum of money, and a site and the buildings on it, then known as ‘Bowyer’s Tannery’ was purchased, but nothing further was done. The ground lay waste until 1836 when Bishop Daniel Corrie of Madras wrote to the Home Society and obtained a grant of 200 pounds. By means of subscriptions chiefly raised by the exertions of the Bishop’s daughter, and some of her female friends, a catechist was engaged, whose business it was to seek out and collect together the Christians scattered around this place, and read the scriptures amongst them. However, the sudden death of Bishop Corrie in 1837, while presiding over a meeting of the S.P.G. in Madras, further delayed the construction of a Church.

In 1837, Carver was transferred to Mannargudi by the new Superintendent of the Methodist Missions in India and Ceylon and was succeeded by G.U. Pope, the famous Tamil Scholar. In the meantime, the M.D.C. had decided to resume work at San Thome, and accordingly, the Rev. A.C. Thompson of the Vepery Mission was appointed by the Archdeacon to look after the San Thome Mission. Since November 1837, Thompson had been regularly holding Services both in English and in Tamil.

Writing in 1838 to the S.P.G. in London, Rev. Thompson stated: “The average attendance is about 23 at the English Service, and 40 at the Tamil Service. An English School has been commenced in which there are now 23 children. A Tamil School has also been attempted, but it has not yet succeeded”.

Thompson once again took up the question of the erection of a Church, and received for the purpose Rs. 2,000/- from the Metropolitan, and smaller sums from other sources, but on his departure to England in 1839, the scheme once again fell into abeyance. The Rev. W. Taylor, originally of the London Missionary Society, was now placed in charge of San Thome with the additional care of St. Thomas Mount. Speaking of Taylor, now single-handed in Madras, the new Bishop Spencer wrote – “Our zealous and able missionary is literally sinking under the weight of his charge.”

In 1841, Robert Carver was back at this post in San Thome, with a license from the Bishop of Madras, and his connection with the Methodists severed. He was ordained deacon and priest in 1842, and in December of the same year – by which time more money had been collected, he had the supreme satisfaction of witnessing the consecration of the present St. Thomas English Church and an adjacent burial ground by Bishop Spencer of Madras, in the presence of the Metropolitan.
Carver died of brain fever, resulting from sunstroke in 1845 and was buried under the altar. The Bishop, then out of Madras, having heard of Carver’s hopeless state, wrote in his journal: “The sad tidings reached me here of the utterly hopeless state of my dear, long-tried, and always found faithful friend, Mr. Carver, one of the most devoted servants, I hesitate not to say, of the Lord Jesus Christ in the diocese”. The following inscription on the tablet over the grave was composed by the Bishop himself: “Sacred to the memory of the Rev. Robert Carver, Missionary of the S.P.G., and late minister of this parish, who departed this life at St. Thome on August 25, 1845, age 57 years, after thirty years of devoted work in India. Blessed are the dead which die in the Lord”.

The separation of the English and Tamil work in San Thome dates from 1848, when the Rev. A.R. Symonds, Secretary of the S.P.G., in Madras, purchased for the use of the Tamil congregation the old Wesleyan Chapel, formerly used by Carver. Rev. Symonds appointed a ‘Eurasian’ clergyman to minister in it, followed by Indian clergymen.

In and since 1856, successive attempts were made to sell the English Church to Government and to secure its conversion into a Government Chaplaincy. This was because, on one hand, the Directors, feeling that Governments in India ought to dissociate themselves from missionary work, had already embarked on a definite policy of abolishing the joint use of Churches by European and Indian congregations, not only in San Thome but also in ‘Black Town’, Trichinopoly, Tanjore, Ramnad, Palayamcottai and Chittoor. On the other hand, the Bishop, the Archdeacon and the S.P.G. were convinced that it was not morally right to expend Mission funds on European congregations.
It must be remembered that, at this time, St. Thomas was the fashionable Church of Madras and was attended by the Governor of Madras (who held a pew) and by the elite of Madras Society, who also, incidentally, contributed liberally towards S.P.G. Funds. The Church building, therefore, together with the School and the Parsonage, was offered to the Government and was valued by the chief Engineer at Rs. 20,068. But the sale was never effected for one reason or another. All that happened was that a grant of Rs. 100 per month was obtained in 1863 from Government of ministerial services to the English congregation and for the use of the burial ground, the Government also undertaking to keep the fabric in repair for the time being.
For many years since, the incumbency of the church was filled by the Secretaries of the S.P.G., Madras, notably by A.R. Symonds, J.M. Strachan, M.D., afterwards Bishop of Rangoon, C.E. Kennet, D.D. (Lambeth), the Anglo-Indian divine, F.H. Reichardt, W. Relton and Arthur Westcott. The Church was also served by Principals of St. Paul’s High School, Vepery, namely, the Rev. K.V. McPherson, and by the Rev. G.M. Withers and by Cathedral Chaplains. Rev. David Chellappa (who later on became the second Bishop of Madras Diocese when the Church of South India was formed) was the first Indian to serve here. There are about 12 memorial tablets of congregation members from this period.

When the Church turned 100 in 1942, centenary celebrations were held but not in a grand scale, owing to many reasons. There was a decline in the number of congregation members, partly at least through inter-marriage with the predominant Roman population, but still a small but keen group of Christians, Europeans, Anglo-Indians and English-speaking Indians, were devoted to their little old Church. For them, the year 1941-42 has been a difficult one financially owing to the evacuation.

UNDER THE CHURCH OF SOUTH INDIA

As the nation moved towards independence, the churches in India felt the need to form one united church to bear witness effectively in this land. When the Church of South India, which wanted to call itself on the basis of its location, was formed, it was able to bring both the Episcopal and the non-Episcopal churches together. It had united the Anglicans, the Methodists, the Presbyterians and the Congregationalists and was inaugurated on the 27th of September 1947. Thus, St. Thomas English Church at Santhome, being part of the Anglican community, was brought under CSI Diocese of Madras, but was allowed to continue its own tradition. Great men of God like Rev. Honest Chinniah, Rev. F.B. Christian, Rev. R.L. Manson, Rev. Peace B. David, Rev. Ebenezer Immanuel etc., have since served as Pastors in this Parish.
Also remarkable during this period was the yeoman service rendered by Mr. David Samuel (former Principal of Christ Church Anglo-Indian Higher Secondary School, Mount Road), one of the Lay Preachers at St. Thomas English Church for over four decades since 1945. Due to the shortage of clergy in those days, the Bishop Rt. Rev. Hollis gave him a license to preach throughout the Diocese. He conducted the Matins on every second Sunday in the month, and his sermons were known for their brevity, wit and richness of thought.
As an English congregation among the Tamils, St. Thomas English Church has been steadily growing ever since, not just in numbers, but also in its many outreach activities, thereby bringing glory to God.